The Saudi flag is distinguished in that it is the only one in the world that is not lowered or lowered to half the mast in mourning or disasters and major events that express the position of the state and international ceremonies, and it is forbidden to touch unclean land and water, and to enter with it to places that are not purified, or to sit on it, because of its religious significance by adding The word Islamic monotheism to him, and the Arab sword, which symbolizes patriotism.

Artemis 1.. The kingdom is the latest contributor to reaching the moon
The Kingdom calls on the Lebanese authorities to pursue “Ali Hashem” and hand him over to it

The flag is inherited from the banner that was carried by the rulers of the House of Saud when they were spreading the call and expanding their areas of influence during the first Saudi state, as the banner at that time was green, made of silk (weaving) and brim (the finest silk) written on it “There is no god but God”, and the Saudi flag Today, it is the same banner and banner that was carried by the soldiers of the first and second Saudi states since their inception.

On January 31, 2022 AD, the Saudi Shura Council approved, by majority, the draft amendment to the flag system issued by Royal Decree No. (M/3) and dated 10/2/1393 AH, to keep pace with the development witnessed by Saudi Arabia, and to protect the state emblem by specifying penalties and filling the legislative void related to non-discrimination. The existence of an official national anthem system.

The stages of development of the design of the Saudi flag

The story of the Saudi flag began in 1750, when the Kingdom of Saudi Arabia was called the Emirate of Diriyah, and the flag was rectangular in shape with a dark green base in the middle of a crescent shape drawn in white, and the flag remained in this shape between the years 1750 to 1818 AD.

Flag of the Emirate of Najd

The shape of the flag developed after that when the journey of the founding King Abdul Aziz Al Saud – may God have mercy on him – to Najd in 1902 AD, he was able to control it and annex it to the country, and put some modifications to the shape of the flag, so he removed the drawing of the crescent and replaced it with the word “There is no god but God”, and the flag remained. This was the case until the end of 1921.

Flag of the Kingdom of Najd

In the period between 1921 and 1926 AD, King Abdul Aziz included more provinces for the Emirate of Najd, and it became called the Kingdom of Najd. At that time, the flag was changed after the word (There is no god but God) was written in a larger font on the green space, and the longitudinal white part became present to the right of the flag. The sword sign in white has also been added below the word monotheism.

With the expansion of the outskirts of the Kingdom to include the entire Hijaz region, the shape of the flag witnessed a new change, so the sword sign was removed, and the green banner was surrounded by white and the word “Tawhid” in its middle was white.

New changes occurred in the flag after the end of the unification of the country in the period between 1932-1973 AD, as the ground of the flag became completely green, and the sign of monotheism was written on it in a large white font, and the sign of the sword was placed under it, the end of which was connected to the beginning of the word of unification.

During the reign of King Faisal in 1973, some minor changes also took place in the shape of the flag, and it is still the approved drawing of the Kingdom to the present time. 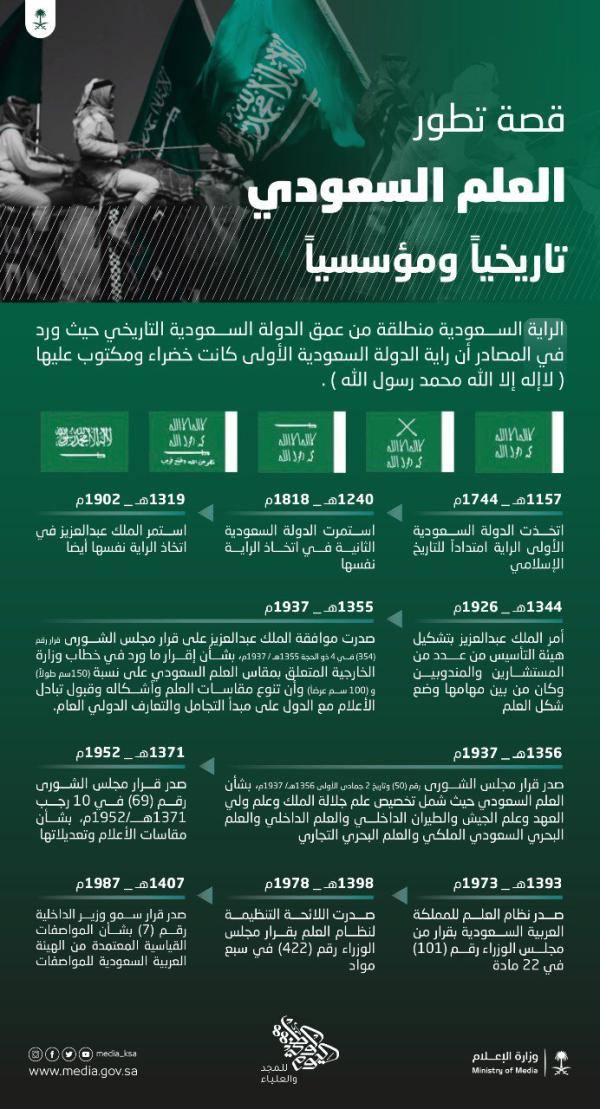 Hafez Wahba and the Saudi flag

Hafez Wahba contributed to the design of the Saudi flag as an expression of his loyalty to the Kingdom, and King Faisal bin Abdulaziz – may God have mercy on him – summoned him to make new amendments to it, so he adjusted its sizes and changed the drawing of the word monotheism, and turned the drawing of the sword so that its handle was under the beginning of the word of monotheism, while its end reaches towards the pole.

This change carried with it a special philosophy, a visual sign of the end of the fighting, and a symbol of strength.

The shape of the flag in Saudi Arabia

The national flag of the Kingdom of Saudi Arabia is rectangular in shape, its width is equal to two-thirds of its length, its color is green, extending from the pole to the end of the flag, in the center of the certificate (there is no god but God and Muhammad is the Messenger of God) and a drawn sword under it and parallel to it. In white and clearly on both sides.

See also  “The homeland brings us together” .. A priest and an Azhari sheikh form the flag of Egypt 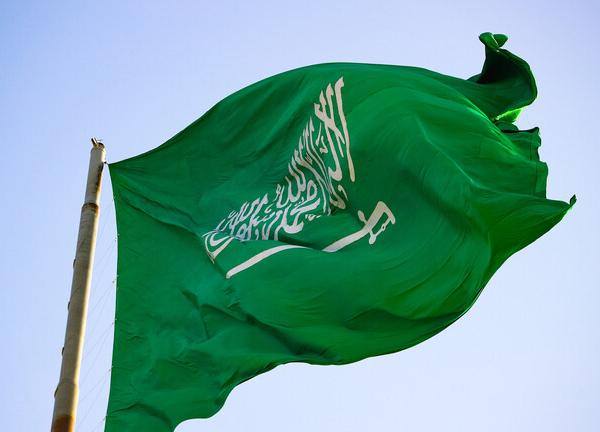 assets related to raising the flag

The national flag is raised inside the Kingdom between sunrise and sunset on Fridays and holidays on all government buildings and public institutions.

Taking into account the requirements of courtesy and international custom, the national flag is hoisted outside the Kingdom daily between sunrise and sunset, including on Fridays and holidays, at the homes of Saudi representations abroad.

The national flag inside the Kingdom is constantly hoisted, day and night, on government centers located on the borders, such as police stations, customs, border forces, airports and ports.

–The national flag, the flag of His Majesty the King, or any other Saudi flag bearing the certificate (there is no god but God and Muhammad is the Messenger of God) or a Quranic verse may not be lowered at half-mast.

It is prohibited to use the national flag as a trademark or for commercial advertising purposes or for any purpose other than what is stipulated in this regulation.

–The national flag or the flag of His Majesty the King may not touch the surfaces of land and water.